Not to be confused with the non-magical Crate.

The Box is a magical object conjured by the Wizard.

The Box is a magical cube constructed of golden colored metal bars. The Box has rotating cogs on all of its sides and the large cogs have twelve roman numerals (numbers 1-12) like a clock embossed on them. The Box is not very robust and can be easily smashed in many different ways. The box can be handled like the ordinary non-magical Use Items, for example it can be moved, thrown or stacked.

The Wizard is able to use his Conjuration Ability to summon Boxes into existence when they are needed. He is able to conjure a Box in a number of different sizes depending on how the Box is to be used. He does this by drawing a square of differing sizes in the air to summon the size of Box required. If the Wizard conjures more Boxes than he has in his inventory then the first Box conjured will be destroyed and vanish. For example if he only has the Ability to conjure two Boxes and he then conjures a third Box the first Box that he conjured will break and vanish, meaning that only two Boxes can exist at any one time. The maximum number of Boxes that the Wizard is able to conjure into existence at one time is seven, provided he has the right upgrades.

He can use his Levitation Ability to lift, lower or move the Box or to stack a number of Boxes on top of each other. He is also able to smash unwanted Boxes or any Boxes that are in his way. Staggering the Boxes when stacking them will allow the heroes to use them like steps.

Sarek can conjure evil boxes into existence which are similar to the Wizard’s Box.

The Box can be used in many ingenious ways, especially in combination with the Plank. 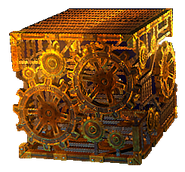 The Wizard's Box (note the cogs) 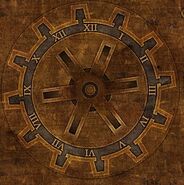 thumb|180px|Roman numerals on a cog.

A stack of different sized Boxes.
Add a photo to this gallery

Retrieved from "https://trine.fandom.com/wiki/Box?oldid=7202"
Community content is available under CC-BY-SA unless otherwise noted.